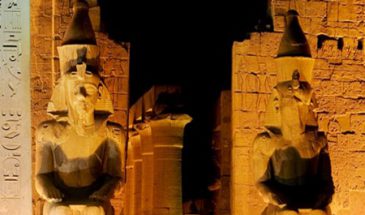 Luxor Excursion by bus – Marsa Alam, where the visit of Karnak temple, the Valley of the kings, the mortuary temple of Queen…

Luxor Excursion by bus – Marsa Alam, where the visit of Karnak temple, the Valley of the kings, the mortuary temple of Queen Hatshepsut and Colossi of Memnon, you can visit also alabaster factory on the west bank of Luxor, the lunch is included in one of the best restaurants of Luxor city.

Karnak Temple
Karnak Temple dedicated to the worship of God Amun Ra the main God of “Thebes” Luxor and the Holy Trinity. It contains a number of temples constructed throughout history from the 11th Dynasty in the Middle Kingdom until the first century BC.

Lunch
After spending a great time at Karnak Temple, you will go to have the lunch at one of the best restaurants in Luxor.

Valley of the Kings
Upon arrival at the Valley of the Kings on the western bank of Luxor, the tour guide will explain the most important tombs of the region where the ancient Egyptian buried and hid mummies, treasures of kings of the New Kingdom.

Shopping
Some of the old Egyptian industries are still inherited and you can learn more about the most famous industries through the time allotted for shopping.

The 2 Statues of Memnon
Tow monumental statues representing king Amenhop the 3ed of the New Kingdom stand in front of the remains of his funeral temple on the western bank for protection, and named after the Greeks during the Roman time according to the sound of whistling issued during the wind entering one of the cracks in the shoulder of one of the statues.

There are no reviews yet.

Be the first to review “LUXOR BY BUS” Cancel reply